The idea about buying and converting a van 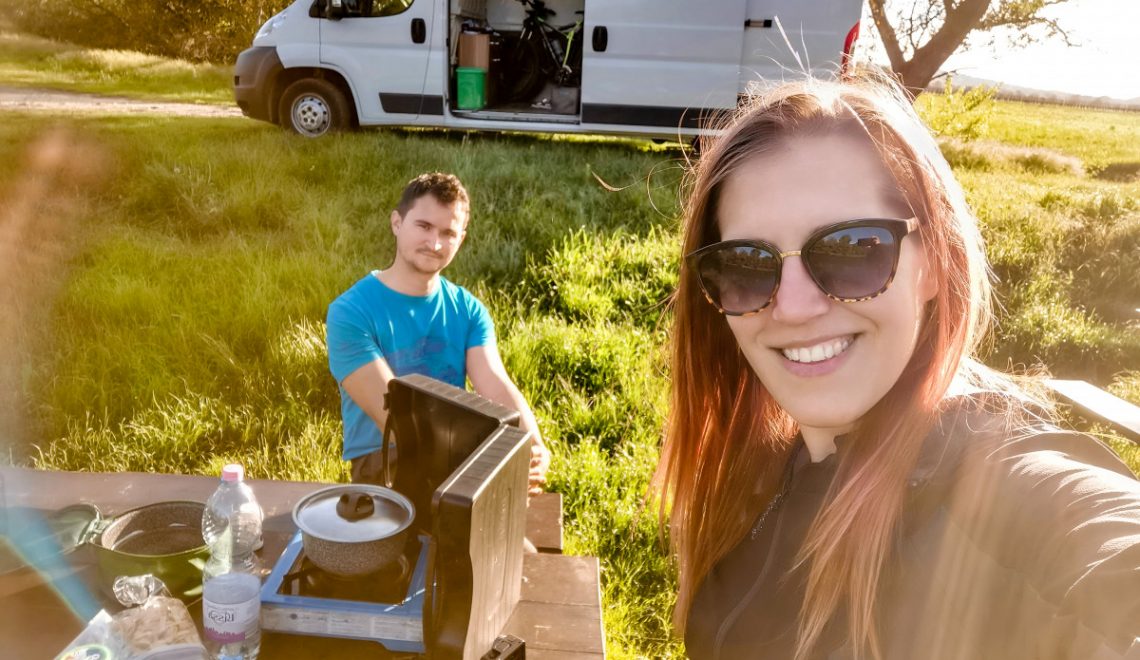 Those of you who have been following us for a long time, know that in October 2020 we were planning a one-year trip around the world. Years of saving to make our dreams come true were crashed by the Covid and all our hopes of getting better soon vanished. We were extremely disappointed, but there is practically nothing we can do about the virus. This is how the idea of buying and converting a van came up to our minds.

I am a person who lives for his goals and dreams and works to try to achieve them as much as possible. When I realized that there would be nothing to do with a one-year trip, I came up with the idea for a new “project”, which I quickly fell in love with. Wild camping and nomadic vacation spending have become more and more popular in recent years. There is nothing more beautiful than spending evenings by the campfire and waking up to cold, but at the same time beautiful mornings in the Dolomites with a view of the mighty peaks. Or waking up on one of the many Greek beaches, just a few steps away from the sea. The older we get, the more we appreciate the peace, quiet, and vacation where we completely disconnect.

The idea of converting a van

In October, I started researching the so-called “vanlife”, life or traveling by van. At first, I was fascinated by the idea of a roof tent or a smaller van that would also serve us as a personal vehicle. I quickly realized that such vans are not exactly cheap. Due to the price of installing a roof (around 5,000 euros), I quickly abandoned the idea of buying a van where we would neet to install high roof.

I started researching larger cargo vans that can be nicely converted into a functional and smaller motorhome…. 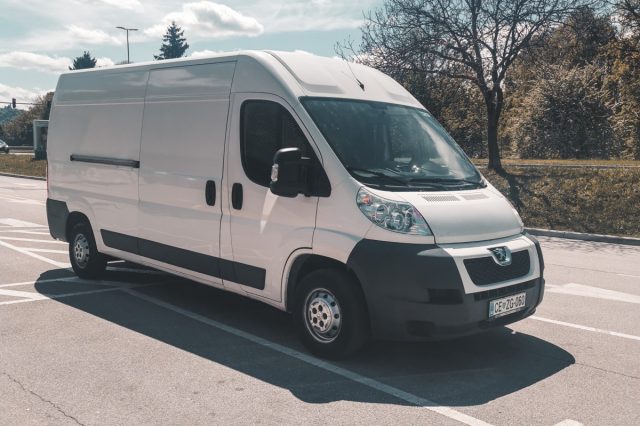 The decision to buy a van

I finally (seriously) mentioned the idea of converting a van to Klemen, who was not impressed at first. After a week of constantly watching youtube, Klemen was also completely enthusiastic about the idea. He was even impressed to the point that he bought a premium profile, which means that commercials are not played while watching the videos. After two weeks, a mutual decision was made about buying a van.

We started following the ads on internet. and read a lot about the conversion itself, laws, regulations … Klemen researched mostly youtube, and I spent countless hours on Instagram and Pinterest to get information on how to make something and get an idea of what the final product we want. 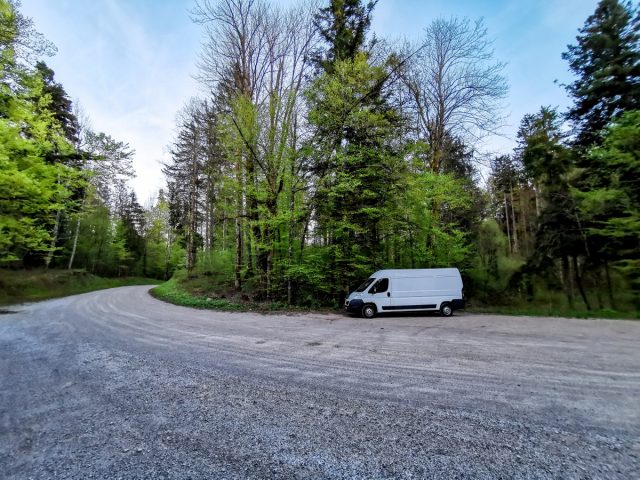 Which van to choose?

There are many models of larger vans on the market, which at first glance differ mainly in size and brand. When you follow the vans in a little more detail, you find that vans vary a lot in height, width, length, and so on. And with that, the realization that not every van is suitable for conversion, as we imagined. So we started looking for a L3H2 size Peugeot Boxer, Citroen Jumper or Fiat Ducato van. We decided on the L3H2 size because it will offer us enough space and standing height, and with that the use of the van throughout the year.

If someone had told me at the beginning that buying a van was such a project, I wouldn’t have believed it. Buying a well-maintained van that doesn’t have a huge mileage, is serviced is almost like winning the lottery. Not only well-maintained, there are not a lot of vans in general on the market. We practically looked for it for half a year, and in the meantime we came across quite a few inconveniences and gray hair.

We followed the ads on internet practically all the time and when a new ad appeared, we called quickly and good vans were sold in two or three hours. We also agreed to see the van, which looked great in the pictures, but the reality was something completely different. We were also in a situation where we were driving to see the van and in the meantime we received a message that the van had already been sold.

We were aware and also warned us that when buying, we must be really careful about who we buy from, as well as how the van is maintained and serviced. The vans are mostly owned by companies that don’t look after them, don’t service them regularly, and once they’ve “served up,” they simply sell them. However, repair costs are significantly higher than for cars. 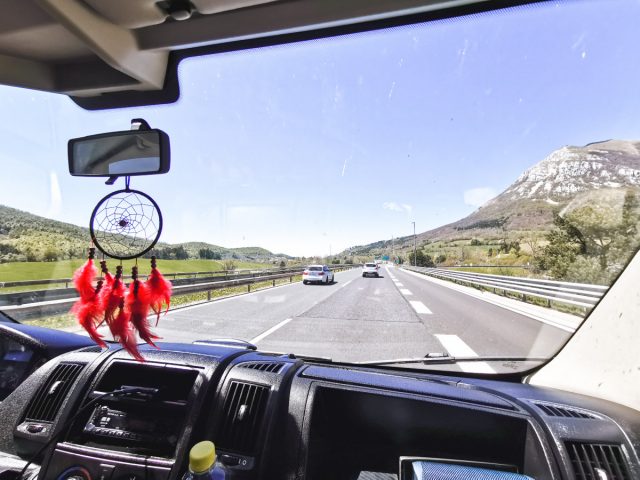 At the end of April, we followed an ad for a van for a good week, which we eventually bought. We were in a dilemma whether to take the mentioned van or to look further and buy something newer. After careful consideration, we decided that this van would be quite OK. Conversion is not cheap and always applies more than you initially expect. We would rather choose financial security than pay more than we want. 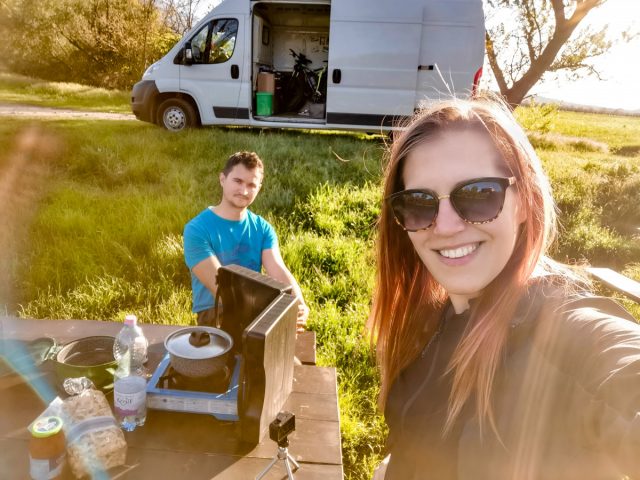 We have a van, what now?

Honestly, we are really very happy to finally have a van. We will first take him to a mechanic to fix things that need to be replaced, and then to Klemen’s father to fix minor beauty flaws.

In the meantime, we will start ordering the things we will need for conversion. Already while looking for a suitable van, we somehow had the idea of what the interior would look like, and above all, what we actually need. We came to the conclusion that we need enough storage space (bicycles, sup, climbing equipment), standing height, good ventilation, a comfortable seat at the table that will turn into a third bed, heating and enough electricity (solar cells on the roof) that we can be completely self-sufficient on our travels.

Why did we decide on the actual conversion instead of buying an already made motorhome?

The most frequently asked question, to be honest. The answer is simple. Because already converted vans are simply too expensive, the interior is not what we like. We imagined a more special and unique interior, which is not present in classic motorhomes. We are aware that we will spend a lot of time and effort on conversion. But all this is not a problem for us, but a joy. However, it is true that Klemen knows how to do many things himself and I also know how to grab one of the tools.

We believe that we have a lot of work and gray hair ahead of us, but we also believe that in the end we will stand behind our decision to do the conversion by ourselves. Wethink that what you create yourself, you appreciate much more and it gives you greater satisfaction. 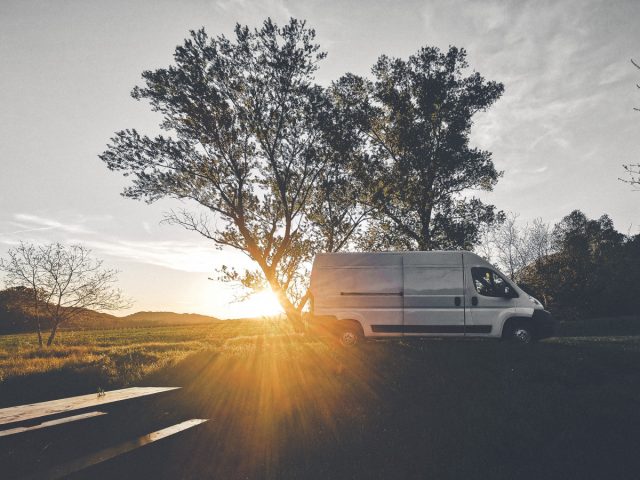 We also tested the van a good two weeks after the purchase and went to Vipava and Rakov Škocjan for an extended weekend. We installed a temporary bed, drawer and a portable toilet inside. As befits a “vanlife”, we did not sleep in the camp, but in the wild. For the first time, I think we slept in beautiful locations. 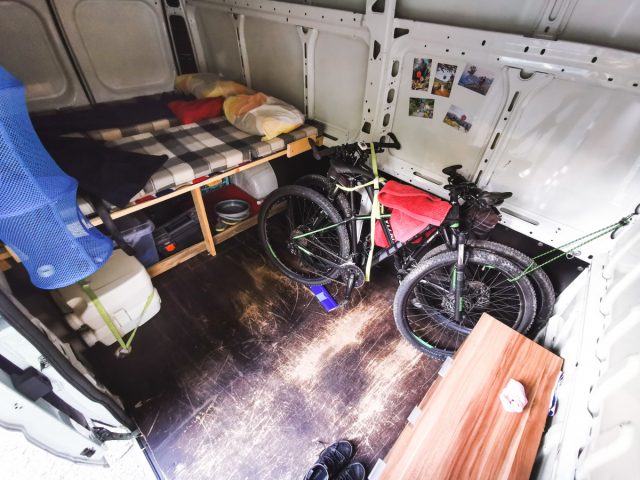 A really large project awaits us, which we will be happy to share with you. We will write more extensively on the blog, and you can also follow us on Instagram, where we will post on a regular basis how the processing is going. 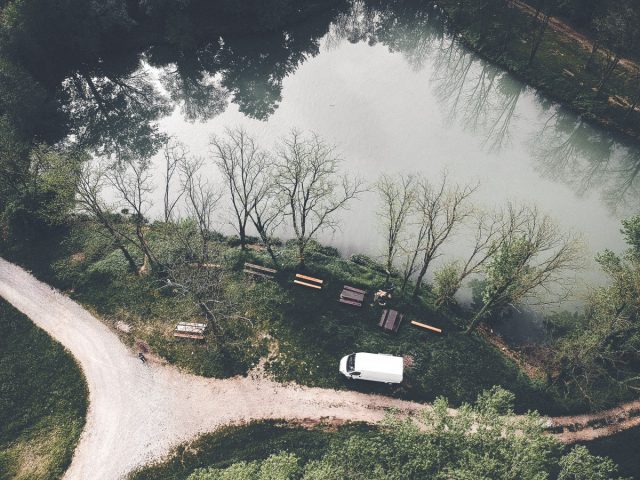