7 most beautiful waterfalls in Slovenia

Do you agree that waterfalls are something special and that their surroundings have a very special energy? If so, read on. If you love waterfalls as much as we do, this post the 7 most beautiful waterfalls in Slovenia, will be perfect for you.

Starting point: in Mojstrana follow the gravel path that leads to the Vrata valley. The starting point for visiting the waterfall is at the hut near Peričnik, from where you will reach the first waterfall in 10 minutes and the second one in 15 minutes.

Price: a tour of the waterfall is free, during the main season they charge a parking fee of 3 € / 2h, you pay in the hut at the parking lot. 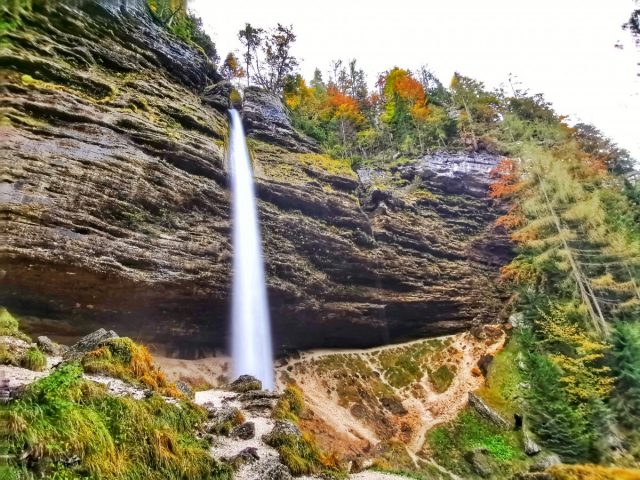 Boka waterfall is known as the most watery waterfall in Slovenia. With its 106 meters, it is already visible from the car from the road on the route Bovec – Kobarid. The view of the vertical wall, from which the waterfall roars with all its might, is a real feast for the eyes. During the melting snow or during heavy rains, the waterfall is truly magnificent.

Starting point: on the main road between Kobarid and Bovec. You can see the waterfall from the road, walk to a nearby lookout point (10 min) or go even higher to the lookout point (1 h) where you will have a direct view of the waterfall. You need suitable hiking shoes for this part of the route. 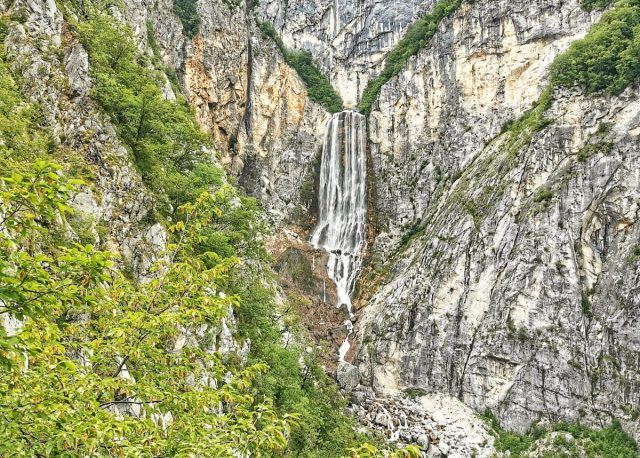 On hot summer days, the Virje waterfall in Bovec will be a great place to see and cool off. The Gljun stream soon after its source creates a 20-meter-wide and 12-meter-high stranded waterfall. Its turquoise pool, which invites you to cool off on hot summer days, but beware, swimming is only suitable for the bravest, as the water does not exceed 7 degrees in summer. The best time to visit the waterfall is in May and June, as due to the melting snow in the hills, the waterfall is more magnificent. 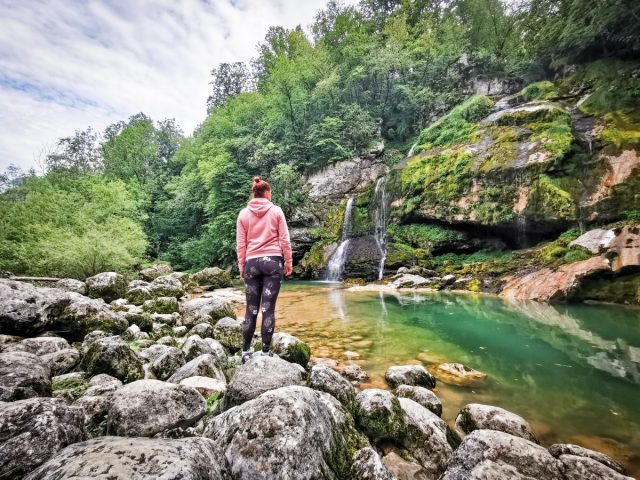 In the heart of Pohorje is hidden the picturesque Šumik waterfall, which is a little harder to find. The Lobnica stream flows through a beautiful gorge, in which the stream creates two beautiful waterfalls, Mali and the better known Veliki Šumik. The path to the waterfall is wild, steep and full of moss-covered rocks, so suitable footwear (hiking boots) is required for the path. First visit the 25 meter high Šumik waterfall, and a little lower the small Šumik waterfall, which will take you 10 minutes.

Starting point: to access the Šumik waterfall, you can choose two routes, namely the route from Rogla, past Osankarica or the route from Maribor or Dravograd, past Selnica ob Dravi and Ruše, to Smolnik. The parking lot is a little harder to spot because there are no other markings other than the sign hidden at the beginning of the trail. Leave the car in a small parking lot by the road and follow the poorly marked path to the waterfall, which you will reach in 20 minutes.

Rinka Waterfall is located in the heart of the Logarska Valley and is one of the most famous and visited waterfalls in Slovenia. The waterfall, with its 90 meters in height, falls over a vertical wall, which ranks it among the highest free-falling waterfalls in our country. It is fed by waters from the Okrešelj area, and the waterfall reaches its greatest majesty in spring and autumn. Lonely Planet has ranked the entire Logarska valley among the most beautiful alpine valleys in Europe, and the Rinka waterfall adds its charm to the entire valley.

Starting point: the waterfall is located at the end of the Logarska valley, which can be reached by car, on foot or by bicycle. At the end, another 10-minute ascent to the waterfall and the Eagle’s Nest awaits you.

Price: the tour of the waterfall is free, but upon entering the Logarska valley you have to pay an ecological tax of 7 euros (car). Of course, you can avoid paying if you go to the valley out of season or if you are early enough not to collect the entrance fee (the time depends on the time of year). One of the possibilities is to leave the car in front of the entrance and go to the waterfall on foot or by bike (7 km in one direction). 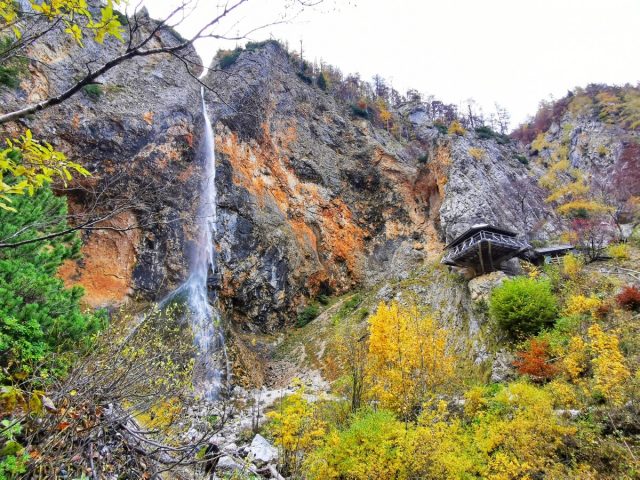 Not far from Kobarid, the Kozjak waterfall is trapped in a stone hall, which with its 15 meters is considered one of the most interesting and picturesque waterfalls in our country. A nicely arranged promenade leads to it. You will end the tour on a wooden “balcony”, from which you will have an unforgettable view of the waterfall and the turquoise pool. The beauty of the waterfall and ease of access are the main reasons for increased visits in the summer months.

Starting point: Kozjak waterfall is accessible from the road Kobarid – Drežnica. You can reach it in two ways. On the first route, you cross the Napoleon Bridge, where you follow the signs for the waterfall. Shortly after crossing the bridge, on the right you notice a paid parking lot where you leave the car (1h, 3.5 km). On the other route, you can leave your car at the Koren campsite. Head over the photogenic wooden footbridge, only a 1 km walk to the waterfall. The route is shorter, you will most likely also avoid paying the parking fee (at the time of our visit, there was no one to collect the parking fee). The last part of the trail is a bit annoying to meet, as the trail is slippery and narrow in many parts. Appropriate footwear is recommended. 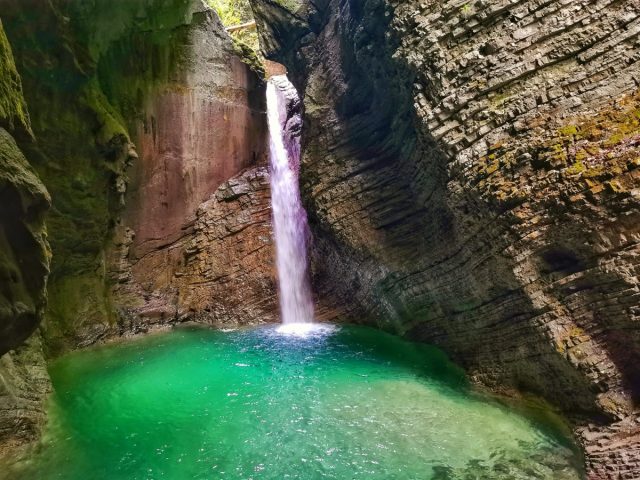 The Martuljek waterfalls are a real pearl of the Slovenian alpine world. On its way, the Martuljek stream creates the upper Martuljek waterfall, which descends in three stages over a 110 m high wall, and a little lower it falls again over a 50 m high wall and creates a lower waterfall that falls into the narrow Martuljek gorge. Due to the easy access through the picturesque Martuljek gorge, the waterfalls are an extremely popular excursion point, which is also suitable for families. A visit to the lower waterfall is suitable for everyone, while the upper waterfall is a bit more demanding at the back and requires a bit of climbing, making it more suitable for experienced hikers. You can combine a wonderful trip with a visit to Koča pri Ingotu on the way between the two waterfalls.

Starting point: from Jesenice we drive in the direction of Kranjska Gora. Our starting point will be in Gozd Martuljek (in front of the bridge on the right), where we leave the car at the camp or hotel Špik. From the parking lot, return back to the main road, where you turn onto an asphalt bike path. You will soon notice a forest path and signposts leading to the Martuljek waterfalls and other hiking trails. You will need 40 minutes of easy walking to reach the lower waterfall, and an additional hour of walking to the upper one. 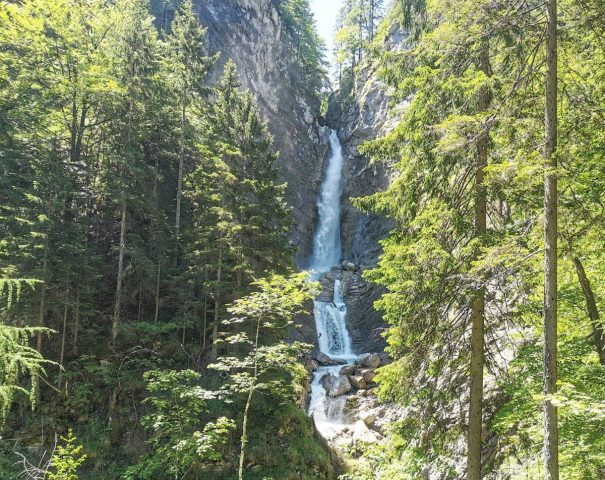 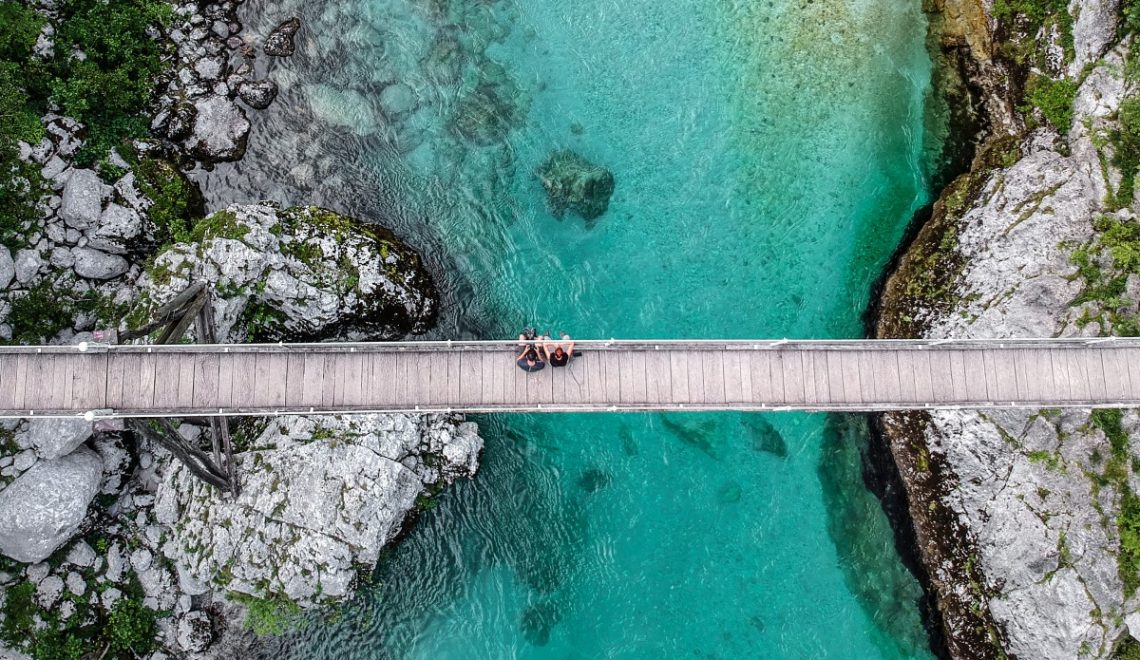 Activities, Europe, Slovenia, Trips
20+ ideas and activities on what to do in the Soča Valley 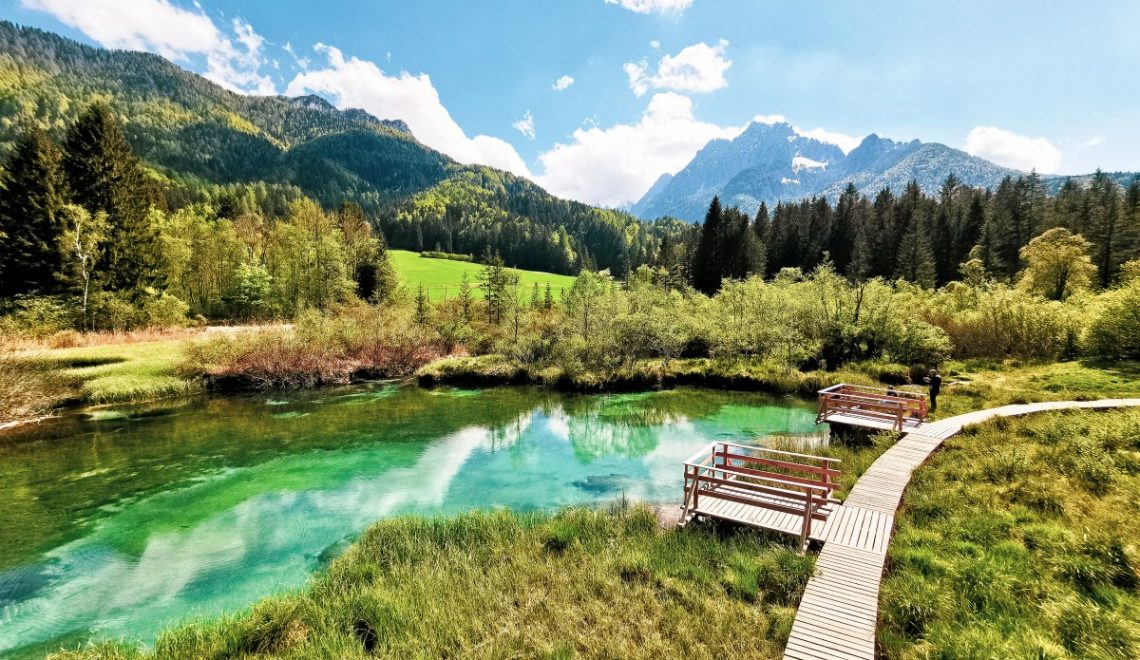